Blood of Ravens by Jen McIntosh 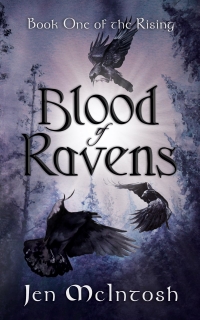 Hunted. Hidden. Scattered. But the old bloodlines hold true. And now is the time of the Rising.

It’s been a hundred years since the Shade King orchestrated the Fall of the Graced; a century since he tipped the balance in his favour and brought those magically gifted warriors to their knees. But now a new power is rising and even the faintest ember, buried amongst ash and ruin, can reignite the flames of war.

Renila remembers nothing of her life before the birth of her son, save the old stories she knows by heart. But when a stranger arrives at the castle she calls home, her past begins to resurface – and with it, her power.

Enslaved by his master’s dark magic, the Shade King’s general, Alexan, has been dispatched to hunt down the King’s daughter – and either return her to her father, or kill her. His history with the Princess makes him well suited to the task, but it may also be his undoing.

Keriath, bastard daughter of the Shade King, has been hunted her entire life and, since she was old enough to wield the power in her veins, has dedicated herself to destroying the monster who claims to have sired her. But the events of a single night may change her fate forever.

The twins, Lucan and Suriya, are plagued by nightmares – by visions of myth and monsters – for which their mysterious yet domineering mother blames Renila and her stories. But there is something she is not telling them, and they are determined to find out what.