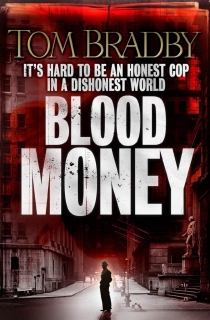 IT IS HARD TO BE AN HONEST COP IN A DISHONEST WORLD !!
A stunning new historical thriller set during the Wall Street Crash of 1929.
New York, 1929, a city of speakeasies, swells and hoodlums at the fag end of the roaring twenties.
It’s a hell of a time and place for a young cop to be trying to make his way in the world.
Joe Quinn has been given a shot at the NYPD’s main headquarters squad and his first case is one that could put his name up in lights – a banker flops onto Wall Street and all the signs point to murder.
Pretty soon, the dead man is not alone – a group of old buddies is being eliminated, in a particularly gruesome manner.

The men have connections to Lucky Luciano and other denizens of the organized crime world.
Their leader’s identity is a closely guarded secret – he is known simply as ‘the bag man’, once the name given to a top cop on the take.
The days of such naked corruption are supposed to be over, but nothing in prohibition era Manhattan is that simple.

For Joe Quinn, a case that starts as an opportunity swiftly becomes a nightmare from which there is no escape.
The path seems to lead inexorably towards his own father, once New York’s foremost celebrity cop.
And at the heart of the investigation lies a woman whose love he has fought to deny for nearly a quarter of a century.
She was adopted by his mother.
She is about to marry his brother.
And now, through her, he’s about to find out just how painful being an honest cop can be.