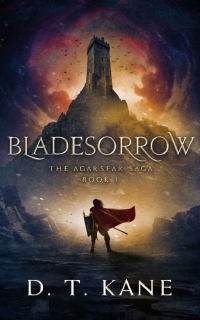 “Taul Bladesorrow betrayed us all. And he murdered my mother.”

In the land of Agarsfar, legend has it that all of time exists on the one True Path, watched over by the mythic, time-traveling Aldur. Reality has strayed far from myth. The Aldur are dead, slain by one of their own. Devan is all that remains; all that stands between the sanctity of time itself and eternal chaos.

History says Taul Bladesorrow ought to be a revered leader of Agarsfar. But time has been altered. Now society deems him a traitor, his very name anathema. When Devan reveals that Taul is essential to saving all existence, he expects the famous man to leap to his aid. But Taul sees little reason to save the society that has scorned him.

When childhood friends Jenzara and Ferrin are forced to flee home, they are rescued by the unlikeliest of heroes—the infamous Taul Bladesorrow himself. Jenzara believes Bladesorrow responsible for her mother’s death. How can she possibly accept his aid? And while Ferrin relishes the opportunity to learn from a living legend, a dark secret Ferrin conceals could mean ruin for himself and all those around him.

Valdin was an Aldur, now stripped of his powers. He’s made a deal with an ancient evil: The life of his dead love—executed for a crime she would commit in the future—in exchange for the sanctity of time itself. Valdin seems a madman driven by grief, but he knows things others do not. When his knowledge is revealed, some begin to wonder if his revolution is actually justified.