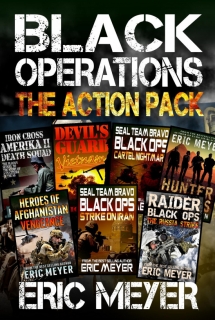 Eric is UK author of over fifteen books. He is a graduate of University College, Cardiff, where he studied politics. He served part-time in the Commandos, the Royal Marines Reserve, reaching the rank of Colour Sergeant.

Eric is married with three children, and still pursues his military and historical research in his available spare time. He is also a keen runner. Throughout his career he has combined his extensive and growing knowledge of military affairs with his zest for the latest motivational tools to produce novels that will both thrill and entertain the reader. Eric Meyer is a full-time novelist.

1# – Echo Six – Assault on Iran
Assault on IranA raid on a drug trafficker’s factory uncovers a secret that sends a chill through the heart of NATO. An Iranian cleric, captured in the raid, tells of a conspiracy at the heart of the Ahmadinejad’s Iranian government. A terrorist group, part of the Revolutionary Guard is on a mission to acquire nuclear warheads. Weapons which will enable them to launch a conflict that would threaten the peace and security of the world, and trigger Armageddon.

#2 – SEAL Team Bravo – Cartel Nightmare
Cartel NightmareThe death of DEA agent in a squalid Mexican town forces the world’s most elite fighting force to act. This time, the brutal and callous drug traffickers who haunt the dark underbelly of Ciudad Juarez have gone too far. For the dead agent was the nephew of US Marine Corps Major General Hicks. With links to the SEALs, he insists on nothing but the best to avenge his nephew. They authorize a mission to hunt down and destroy the drug cartel, led by Chief Kyle Nolan. Yet the Mexican end of the operation is only the first part of the mission.

#3 – Devil’s Guard Vietnam
Following the myths and legends about Nazis recruited by the French Foreign Legion to fight in Indochina, this is the story of one former Waffen-SS trooper who emerged from the hell of a defeated Nazi Germany. Only to partake in the death and destruction of the French war in Indochina. Following the defeat, a new country is born, and a new nation offers them aid. The country is Vietnam, and the nation is America.

#4 – Raider – The Russia Strike
An almost lawless country ruled by the FSB, dread successor to the KGB. The country lives in terror of the Pamyat, fanatical Russian Nationalists who have formed a criminal gang. An organization which will commit any crime, murder any civilian, and even commit genocide, to further their cause. When a package of sensitive information disappears in a well-organized robbery in Manhattan, the trail leads to a Russian hellhole no sane person would wish to visit.

#5 – The Hunter Killers – Egyptian Dawn
Egyptian DawnLiam Schaeffer is the former leader of the ‘Hunter Killers’, a group of elite combat veterans turned mercenaries. The unit was disbanded after a series of brutal incidents in Afghanistan. Shortly after returning to the US, he gets an urgent call for help from a former member of his unit. He races to help, but he finds the man is already dead. Murdered. And for Schaeffer, the real trouble is about to begin.

#6 – Black Ops Heroes of Afghanistan – Vengeance
VengeanceRafe Stoner, a former Navy SEAL, leads a cruel existence as a gun for hire in Afghanistan. After the brutal killing of his fiancée he vowed a brutal revenge. A revenge that littered the landscape with the bodies of those responsible. Now he learns his work is not over.

#7 – Devil’s Battalion II – Hitler’s Treasure
Hitler’s TreasureMore of Max Roth’s bloody adventures in the Sonderbattalion Kurz, the cut-throat, brutal SS partisan hunters and looters. This time it is the Fuhrer, Adolf Hitler who insists on the theft of a Christian relic, believed to have been touched by Jesus Christ himself. Hitler…