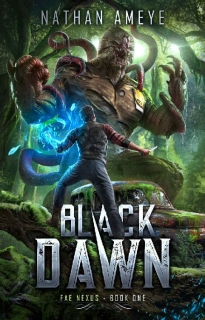 Magic, mayhem, and moonshine.
Gage came home to the Ozarks to mend fences with the friends he’d left behind. But when a solar storm reconnects Earth to the Fae Nexus, the world is engulfed in magical energy, altering the laws of nature… violently. Fuel, ammunition, and electronics explode, leaving the world in a dark apocalypse.
As the flames die down, demons emerge through the Fae Nexus, swarming Gage’s hometown and enslaving the survivors.

To fight back, Gage and his reunited friends harness Fae powers, becoming the Wizard, Ranger, and Fighter they’ve always played in their favorite roleplaying game.

With the help of a pair of moonshiners turned Alchemists and the ghost of a long-dead gunslinger, Gage and his friends have to level up fast to free their families and defend their home against the demonic horde.
He may have walked away once, but this time the only thing Gage is leaving behind are his regrets and a pile of dead demons.