Birth of a Goddess by Renée Jaggér, Michael Anderle 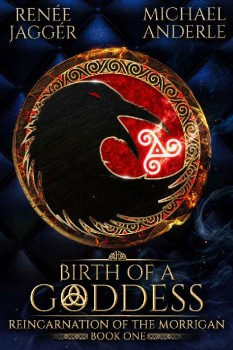 Angelica Morgan is used to facing a crisis as an EMT. Her hands being the difference between life and death…
But things take a turn for the epic when she learns she is destined for the three-fold mantle of the Morrigan.

That’s right, The Morrigan, the goddess of rulership, wisdom, and war who holds the balance of the world in her steady hand.
But this birthright comes with baggage, and nothing is going to come easy, as Ms. Morgan soon learns.
Without even time to take a breath, she finds herself plunged into a new reality of magic and monsters, the likes of which are bound in old tomes or whispered by firesides.

This isn’t just a new normal but her new domain, all one step below the world she used to know.
Some may disagree with the line of succession, but Angelica’s going to learn there’s a way to manage that.
Sharpen your iron and hail to the Queen, baby!