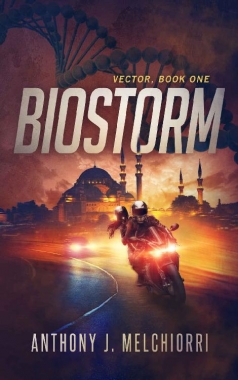 Two covert operatives stand between an insidious scientific conspiracy and global catastrophe.
Alex Wolfe is an elite agent with the CIA. He has a proven track record of stopping international bioweapons programs. Skylar Cruz is a skilled Marine whose battlefield injury sidelined her from serving her country. When they’re recruited for a brand-new covert op group, Vector, combating biological and chemical weapons threats, their first mission had better be a success. Because it’s not just their careers at stake. It’s all of humanity.

Wolfe and Cruz embark on a deadly race against bands of mercenaries and diabolical government forces through the bustling markets of Istanbul to crime-infested Russian port cities and Vietnamese jungles hiding forgotten conspiracies. Only they can stop a rampant airborne bioweapon unlike any the world has ever seen.
Danger is in the air. Literally.