Beyond the Stars and Shadows by Kristen Martin 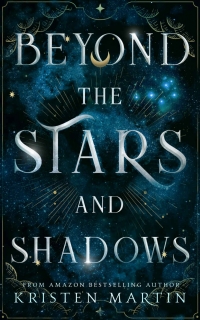 The night sky holds more mystery than every continent on Earth combined—at least that’s what thirty-three-year-old Elara Friis believes. And why wouldn’t she, when she’s been named after one of Jupiter’s many moons?

A long-time assistant to astrophysicist Professor Haven at the University of Colorado Boulder, Elara’s unexpected change in employment status couldn’t come at a worse time. Even more unnerving is the sudden disappearance of her professor just minutes after their last conversation—not to mention the fact that she’s somehow traveled four days into the future . . . with no recollection of those days’ events.

As more professors begin to go missing and the police begin to ask questions, there’s yet another unexpected development in Elara’s life: one that goes by the name of Xero Sivalla. A fellow assistant at the university, Xero seems to have inside knowledge on not only the growing number of faculty disappearances, but on Elara herself.

As Elara spends more time with Xero, the more she discovers just how wrong her assumptions about life, the cosmos, and existence itself have been. Blurring the lines of reality is one thing, but cracking the entire Universe wide open? She should be so lucky—that is, unless it’s been predestined from the start.