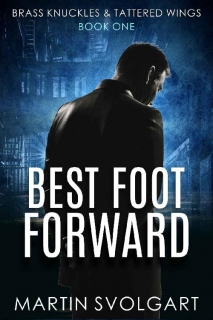 After a freak accident kills his wife and son, Pritchard slips into alcoholism and spends most of his time at a blue-collar bar nearby to avoid the dead and empty house.
A teenage girl sometimes comes into the bar to try to get her drunkard dad to come home, but it rarely works. One day, in his intoxicated state, Pritchard accidentally trips over her scooter, breaking it. He promises the distraught girl that he’ll pay for it, but she’s used to being lied to by drunk men. To follow through, he gives her his business card.

A few days later, she calls him out of the blue, afraid, begging for his help. Her dad has gotten into a card game with bad people, and the debt collectors aren’t stopping with him.

The selfless act of responding to the young girl’s plea upends his world, leaving him only one way out: A walk in life he knows well, but one he thought he’d left behind. A life of crime.
Best foot forward, his late wife would always say. That was how she urged a man with a spotted past to strive to become a better man.
With danger around every corner, Pritchard must decide, will going back destroy him, or will it bring him full circle?