Belly of the Beast by Scott Baron 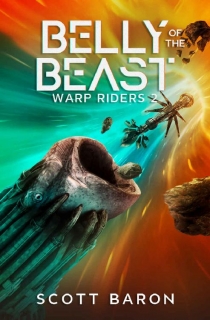 What happens when you learn you’re not the biggest, baddest thing in the galaxy? Sadira and her team were about to find out the hard way.

Tracking their dangerous prey across distant solar systems was tricky, latching onto traces of the hostile ship’s fading warp energy as it lead them on a wild goose chase. But this time when they exited warp something was different. Something was out there. Big. Waiting. And it was the likes of which none of the crew had ever imagined.

Racing the clock in a desperate fight for survival, Sadira and her team found themselves pushed to the limit and beyond. But there was simply no other choice. They would succeed, or their mission would fail. And failure meant a fate worse than mere death.