Behind The Pretty Pink Door by MJ Hardy 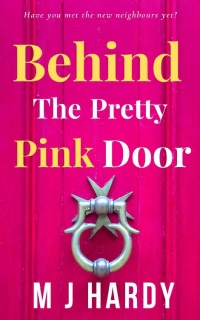 What’s going on behind the pretty pink door?
Can something so pretty hide a dreadful truth?
Esme and Lucas thought they had moved up in the world.
They bought an impressive new house on a desirable development but do they fit in?
Nancy and Adrian moved to escape a secret they appear to have packed and brought with them.What will the neighbours think if they discover what it is?
Jasmine and Liam appear to have it all. Their neighbours want what they have but did they go a step too far to achieve it?

Then there’s Keith and Sandra Wickham who everyone wishes hadn’t moved there at all.
They all have one thing in common and it’s not the street they moved into.
It’s their fascination for what goes on behind the pretty pink door.
Who lives there and what secrets does it hide?
Secrets have a habit of coming out and none of theirs are safe.
What happens when the pretty pink door opens and lets them all inside?
Sometimes it’s easier to turn a blind eye than to face the consequences but true evil is found in the ones who look away and do nothing.