Be Mine Forever by D.K. Hood 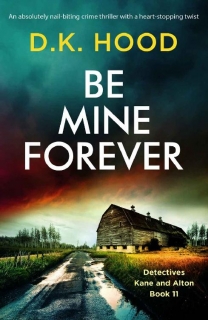 Gray clouds gather overhead as she runs along the dark road. Not a soul is out in the storm, or so she thinks. As the vehicle pulls up alongside her, she sees a familiar face behind the wheel and thinks she’s safe. Little does she know, she has just put herself in unthinkable danger…
When local cheerleader, Laurie Turner, goes missing after practice and her bright red pick-up truck is found abandoned by the side of a quiet road, Detective Jenna Alton fears the worst.

Visiting Laurie’s family house, Jenna senses that the teenager’s home life isn’t as perfect as her father would have people believe. Quick to temper and full of hatred towards Laurie’s mother, Dr Turner doesn’t seem to know the first thing about his own daughter, let alone how long she’s been missing for.
With the clock ticking, the whole town takes to the streets to find the missing girl and, after a frantic search, a terrible discovery is made at the bottom of an old mine shaft on the outskirts of town. Laurie’s pale body is totally still and Jenna is sure somebody in the local community is her killer.

When another cheerleader goes missing, Jenna thinks that someone close to the school is picking the teenagers off one by one. As she talks to the other students, it becomes clear that there are plenty of people who’d like to silence the girls forever.
Then her own deputy David Kane comes face to face with the murderer, and Jenna has to race to save him. Can she do so before it’s too late? Or will another young life be taken?