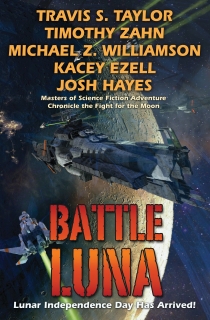 AN EPIC FIGHT FOR INDEPENDENCE ON OUR MOON
Something has been uncovered on the Moon that might have great scientific and economic importance. The Lunar colony is a mining colony with only internal security capabilities. Nobody had even considered that there might someday arise a need to defend the colony from the Earth! But that day has come.

The Lunar colonists made this great discovery and perceive it as their own. Finders keepers and possession being nine tenths of the law is how things are seen on the Moon. But the governments of the Earth don’t quite see eye-to-eye with the Lunarian’s philosophy. As far as the Earth is concerned, they paid for everything on the Moon, so it belongs to them.
There is only one solution: Battle Luna!