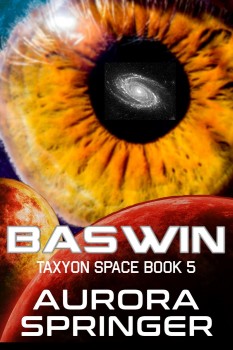 An alien spy on the run.
Two human sisters chosen to train as astronavigators.
Their paths are destined to converge.

Psychic sensitives, Holly Moon and her sister Rosie, are chosen as candidates for Warrish training as hyperspace navigators. The sisters are eager to promote humanity’s advance into space. Will they succeed? They must pass a series of rigorous tests and adapt to the alien neuro-implants.

Alien merman, Baswin Kenton Tallis, Second of his Triad, lives on Earth disguised as a human. When Earth agents discover the secret identity of his older brother, Bas must flee to the Warrish embassy in the Pacific Ocean.

Holly and Baswin are swept together on an island in the Pacific Ocean, but their destiny lies farther away and many forces threaten to drive them apart. Can they overcome the obstacles and find a haven?