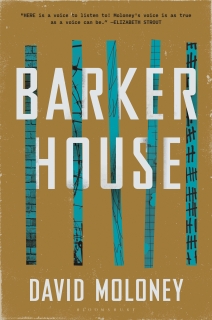 Olive Kitteridge meets The Mars Room in this powerfully unsentimental debut-a portrait of nine lives behind the concrete walls of a New Hampshire jail.

David Moloney’s Barker House follows the story of nine unforgettable New Hampshire correctional officers over the course of one year on the job. While veteran guards get by on what they consider survival strategies-including sadistic power-mongering and obsessive voyeurism-two rookies, including the only female officer on her shift, develop their own tactics for facing “the system.”

Tracking their subtly intertwined lives, Barker House reveals the precarious world of the jailers, coming to a head when the unexpected death of one in their ranks brings them together.