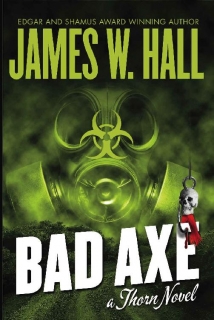 A simple favor: Recover 23 stolen landmines filled with VX nerve gas and rescue a young Honduran girl, Dulce, from a band of murderous white supremacists. Most people would say no. Most people aren’t THORN.

From a Pacific Island base in the past, to the rough back roads of the Arizona-Mexico border, to a tiny town in Michigan called Bad Axe, Thorn follows a dangerous trail that leads to breathtaking suspense.

To save the girl and thousands of innocent American lives, Thorn and Sugarman must infiltrate a terrorist cell far from Key Largo. They’re way out of their element, but the big question is are they out of their league? If they fall short, the axe could finally fall in BAD AXE.