Avengers of Gor by John Norman 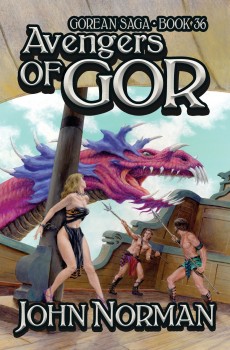 Tarl Cabot, warrior and merchant, pirate and slaver, once of Earth, now of Gor, learns that the Farther Islands, Thera, Daphna, and Chios, west of the Island Ubarates of Cos and Tyros, are being bloodily and systematically ravaged by corsairs supposedly led by himself, by Bosk of Port Kar, as he is commonly known.

How could this be? What is one to make of it? Why would so cruel and outrageous a hoax, apparently pointless, be perpetrated? Who would dare to do so?

And, in the meantime, shipping is assailed and towns and villages are looted and burned.
Tarl Cabot will investigate.
He will seek vengeance.

His quest will carry him to the taverns and palaces of corrupt, luxurious, decadent Sybaris, on Thera, where life is cheap and collared slave girls plentiful, where ruthless corsairs live by the sword and whip, and into strange and dangerous waters teeming with predatory vessels and monstrous sea life.

As the mystery is unraveled, bit by bloody bit, he discovers that its threads may reach far beyond the Farther Islands.