Avenge the Dead by Jackie Baldwin 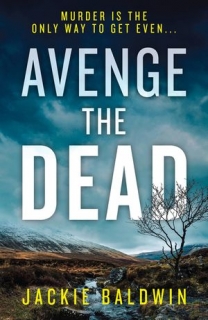 Sometimes murder is the only way to get even…

Four friends with dark secrets. One killer out for revenge. DI Frank Farrell and DS McLeod are tasked with investigating the brutal murder of a defence solicitor’s wife in Dumfries. It’s been over a year since they left the town after an investigation robbed them of a dear friend. But now they’re back and must find a way to move on.

When the son of another defence solicitor is murdered, a strange tattoo etched on his body, the case takes them into darker, more disturbing territory. It leads them back into the past – to a horrific fire in a cottage that took a woman’s life, to four friends harbouring dark secrets – and finally to a killer waiting patiently for revenge.