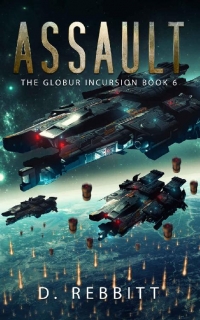 The Fleet has delayed the Globur incursion at great cost. The time bought with their comrades’ lives has allowed the Fleet to build new task forces and new weapons. It is time to expand their system defense strategy.
Unfortunately, the Senate has other ideas – take all the available ships and throw them into a massive gamble. The latest system loss is too much. The Fleet must liberate a system – no matter the cost.
For Rear Admiral Brown, it is a chance to step out from under a cloud of doubt created by the People For Peace, who labeled him the “Butcher of Castellan” and lead the operation. Everyone hopes the new ships and promised weapons will shift the odds in their favor.
Sergeant Major Sanderson does not like it one bit – and he is not alone. Marines follow orders, and the new assignment is why his new unit was created. The first marine planetary assault division will get a baptism of fire.
Everything the Fleet has will be thrown into the operation. Every available Fleet task force, and the marines of the first planetary assault division, heed the call for the Assault.