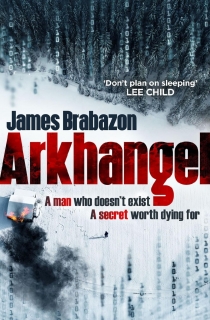 Officially, Max McLean doesn’t exist.
An off-the-books assassin for the British government, he operates alone.
But when a routine hit goes badly wrong, a cryptic note on a $100 bill prised from his target’s dead fingers suggests there’s more to the mission than meets the eye.
Is someone from Max’s former life trying to send him a message?

From Paris to Jerusalem and on to the frozen wastes of north-west Russia, Max is forced into a desperate race for the truth – with unknown enemies determined to stop him at any cost.
And when the secret coded into the banknote is finally revealed, only one thing is certain: with the fate of the world in his possession, failure is not an option . . .
A razor-sharp action thriller with the raw inventiveness of I Am Pilgrim and the breathless pace of movies like John Wick and James Bond, Arkhangel sees James Brabazon stake his claim alongside Lee Child, David Baldacci and Gregg Hurwitz as a master of the genre.