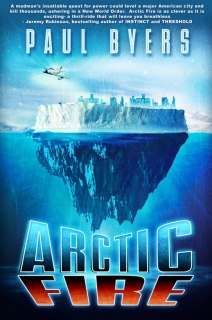 Wealthy entrepreneur Nigel Cain has devised an efficient new way to bring the earth’s most precious resource to the masses – clean water – by transporting massive man-made icebergs from the frigid arctic and delivering them literally to the doorsteps of millions.
Gabriel Pike works at a small engineering firm that has been awarded the task of giving the final safety approval to pilot the first gigantic block of ice into New York harbor.

A consummate showman, Cain has built a fabulous 5-Star hotel and casino high atop the iceberg so his celebrity guests and media elite can cover this spectacle from beginning to end. Pike is whisked away from his work-a-day world and dropped into the lap of luxury where he’s expected to simply rubber-stamp his inspection.

A brutal winter storms ravages the iceberg and exposes structural inconsistencies and hidden agendas that fill Pike with serious doubts about the true intentions of the project. But a grisly double homicide on the ice puts the inspections on the back burner and sends Pike’s life spiraling out of control when he’s accused of being the jealous murderer in a lover’s triangle.
But Pike soon discovers that there is far more at stake than just his life. He uncovers a conspiracy more heinous than anything he could have imagined – a plot that will level a city, change the political face of America, and whose shockwaves will be felt around the world. Fate rests in his hands – if he can survive long enough to take action…