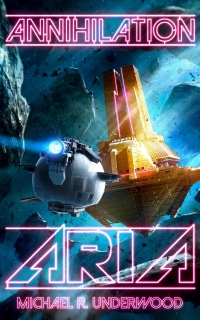 Max is cheery xeno-archeologist from Earth, stranded and trying to find a way home.
Lahra is a stern warrior of a nearly extinct race searching for her people’s heir.
Wheel is the couple’s cybernetic pilot running from her past and toward an unknown future.

On Wheel’s ship, the Kettle, the trio traverses the galaxy, dodging Imperial patrols and searching ancient temples and ruins for anything they can sell. Back on the Wreck, their home and base of operations, the crew of the Kettle are deeply in debt to the drifting’s city’s most powerful gangster, and she wants her money back.
So when a dangerous, but a promising job comes their way, Max, Lahra, and Wheel have little choice but to take it if they have any hope of keeping their ship, and themselves, afloat. But the crew of the Kettle gets more than they bargained for when they find themselves in possession of a powerful artifact, one that puts them in the crosshairs of the Vsenk, the galaxy’s ruthless and oppressive imperial overlords.

Before they know it, Max, Lahra, and Wheel are pulled into a web of galactic subterfuge, ancient alien weaponry, a secret resistance force, lost civilizations, and giant space turtles. The Vsenk will stop at nothing to recover what the crew of the Kettle has found and Max’s brains, Lahra’s muscle, and Wheel’s skills may be all that stands between entire planets and annihilation.
Can they evade space fascists, kick-start a rebellion, and save the galaxy all while they each try to find their own way home?