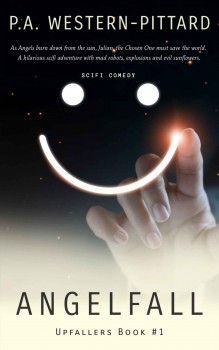 A Hilarious adventure for fans of Terry Pratchett and lovers of quirky fantasy scifi.
What does an Arch Priestess of the War Dragon Temple, a robot with delusions of Godhood, an angel of the apocalypse and a Chosen One all have in common?

Nothing at all. And yet they’re the only ones who can stop the end of the world.
We’re all going to die.
When angels fall from the sky and devastate the Temple-City of Tarn, Julian (a lazy and lowly acolyte) does what no-one else does: survives being hit by one of these celestial beings.
Immediately declared the Chosen One, Julian teams up with the disgraced Arch Priestess of the War Dragon Temple and sets out on a mission to return the angel to Heaven to prevent the Apocalypse.

Which is easier said than done.
Pursued by a religious fanatic and his warbot, Mike, and guided by the ancient wisdom that the way to get to Heaven is to keep going ‘Up’ Julian begins a reluctant quest that eventually leads to the breathtaking discovery of the most ancient secret of the world.