An Obstinate Witch by EM Graham 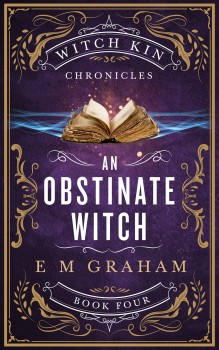 Contact with the Crystal Charm Stone caused deep changes in Dara Martin, leaving her with a power so great, it scares even the elders. This only happened once before in the centuries of the Kin’s rule, but the witch Meg’s fate is a secret buried deep in the past. Dara has no idea what her future might hold.
Whisked away from Scarp to study under the Venerable Nacthan in Edinburgh, she’s forbidden to practice until the elders can understand her new magic. Yet she knows she now has the resources to rescue her mother from the Ice King’s grasp, if only she knew how to get there from here.

A chance meeting leads her into the depths of the Edinburgh Vaults to Auld Meg, who’d been cursed to stone by the Kin to write the most dangerous chronicle of all. If Dara can break the spell and free the crone, she’ll be able to bridge realities to the Ice Kingdom. There’ll be hell to pay with the Kin. But only if she makes it back alive.