An Eye For Murder by Martin Sherwood 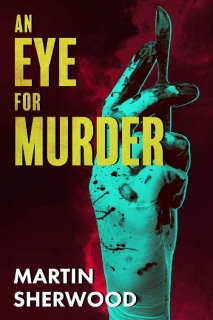 Billions of dollars are at stake and they will do whatever it takes to get them.
A brilliant egocentric scientist is close to a breakthrough that will make cataract surgery unnecessary.
Professor Lucy Efron administers drops synthesized in her lab, which are secretly tested on elderly people, later found in the cemetery, their eyes mysteriously removed.

As Efron approaches the final clinical trial with her 12th test tube, she reveals that two presidents of major pharmaceutical companies are battling over her formula and nothing – absolutely NOTHING, will stop them from getting this precious 12th tube.

The deadly clinical trial could have gone unnoticed, were it not for Milbert, a naïve medical student, whose grandmother suffers from Alzheimer. She alerts him about the disappearing tenants in her nursing home and says that she might be the next on the murderous list.
As Milbert begins his own investigation and gets closer to unveiling the plot, he understands that he has only one shot at stopping the murder of more innocent people, but it could cost him his own life.