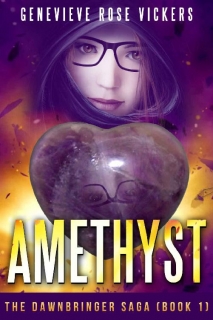 Bring On The DAWN!
Valkyrie Amethyst, despite her heroic name, has pretty modest goals. To go twenty-four hours without a panic-induced crying fit is one of them.
However, when one has joined a team of amateur superheroes for shelter’s sake, there is, unfortunately, no room for crying fits. With her unbending boss pushing her into danger at every turn, the universe seems bent on confirming what Valk already knows: despite her inexplicable and destructive powers, she’s not, and will never be, safe enough to breathe again.

Octavian Robinson, on the other hand, is a pretty happy guy. As a relatively senior member of Valk’s team, he’s quite comfy with his since-birth ability to make illusions. Aside from the occasional hero gig, his days are filled with sketchbooks, canvas shoes, big sweaters, and goofy grins. That, and internalized mental breakdowns.

But Octavian has mastered pushing aside the cause of those over the years, and given that he’s the sole person that keeps his dysfunctional team from murdering one another, his smiles-for-miles attitude is needed now more than ever.
With a fair bit of yelling at one another but without a shred of a plan, Octavian and Valk’s team loads up their 2010 minivan, and takes their crime-fighting skills (or lack thereof) on the road to hunt down their first real supervillain!