Alone Together by Cristelle Comby 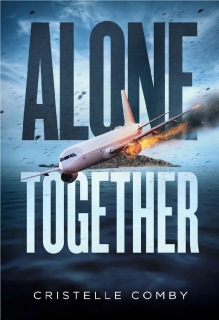 They need all their wits to survive. But a language barrier could leave them dead in the water.
Anne-Marie Legrand is excited to begin her career as an au pair in Sweden. But when the young Swiss woman’s flight from Geneva is struck by lightning, both the plane and her dreams come crashing down to Earth. Waking up bloodied and confused, she’s terrified when she discovers the only other survivor is a middle-aged man muttering in a foreign tongue.

Scottish banker Killian Gordon may be a world traveler, but he knows next to nothing about wilderness survival. Stuck with a woman he can’t understand, he struggles to take charge of the mismatched pair as they explore their surroundings. But the untamed land and endless sea surrounding them tells him no one will be coming to their rescue.

Focusing her efforts on building a sturdy shelter, Anne-Marie battles to keep morale alive with her disgruntled comrade. But with days on the island turning into weeks, Killian fears the odds of living through this nightmare are rapidly declining as the looming Scandinavian winter ensures a lonely and frozen death.
Will they face an even crueler fate than their fellow passengers?