All The Lies by Nicola Sanders 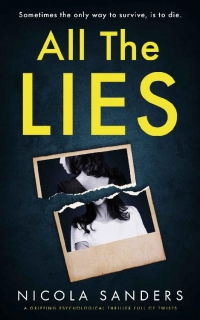 She thought he was the perfect husband. Now she’s running for her life.
On the surface, Amy and Jason have the perfect marriage, but Amy is trapped in a nightmare with a controlling, violent husband. Then on a short cruise without Jason, Amy befriends Liz, a young woman travelling alone on her way to meet her birth mother for the first time. Liz looks so much like Amy that they could be sisters.

When Amy regains consciousness after a terrible accident that takes the lives of many passengers, she finds that because of a mix-up in personal effects, everyone believes she is Liz. Only she knows it is Liz who has gone missing, presumed dead. Now, Amy has to make the most important decision of her life: tell the truth and return to a life of fear or become Liz for a while, until she figures out an escape plan.

But as Amy settles into Liz’s life, she finds that not everyone believes all the lies.
And she is only one mistake away from paying the price.