All Fall Down by James Brabazon 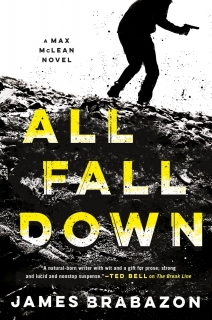 British intelligence operative and hardened assassin Max McLean must discover who’s killing the members of his team in this new electrifying thriller from James Brabazon, author of The Break Line.

Soldier, assassin, and special agent—Max McLean works for a highly secretive unit called The Unknown: a black ops team which delivers off-the-books justice on behalf of the British Government.

When a straightforward operation to kill a terrorist commander goes badly wrong, Max finds himself framed for murder. Cut off from his base and cut loose by his Government handlers, he’s forced to go even deeper underground, propelled across Europe on a personal, high-stakes investigation to clear his name.

Racing against time to find out who his enemy is before his enemy finds him, Max has to unravel the only clue he has to their identity: an unusual hundred-dollar bill clutched in the dead terrorist’s fist.

But in this brutal game of spies nothing is as it seems: as hostile powers prepare to move against the West, Max McLean must face the shocking possibility that the traitor he seeks has been with him all along.