All Eyes on Her by L.E. Flynn 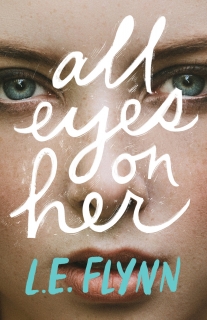 Perfect for fans of One of Us is Lying and We Were Liars, All Eyes on Her by L.E. Flynn is a gripping young adult thriller told from the perspective of everyone except the alleged killer—a seventeen-year-old girl.

You heard the story on the news. A girl and a boy went into the woods. The girl carried a picnic basket. The boy wore bright yellow running shoes. The girl found her way out, but the boy never did…

Everyone thinks they know what happened. Some say Tabby pushed him off that cliff— she didn’t even like hiking. She was jealous. She had more than her share of demons. Others think he fell accidentally—she loved Mark. She would never hurt him…even if he hurt her.

But what’s the real story? All Eyes On Her is told from everyone but Tabby herself as the people in her life string together the events that led Tabby to that cliff. Her best friend. Her sister. Her enemy. Her ex-boyfriend. Because everybody thinks they know a girl better than she knows herself. What do you think is the truth?