Alfheim: The Curse of Nidavellir by John Stoeter 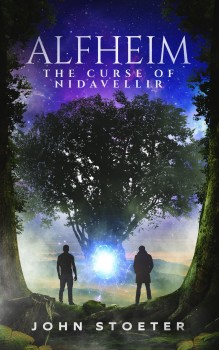 Twenty years after his sister’s mysterious disappearance, detective Michael Leitner finds himself on a hauntingly similar case. This time his cousin, Peter, has gone missing.
In the process of retracing Peter’s steps, Michael stumbles upon a root of Yggdrasil, unveiling long-forgotten memories of his youth, transporting him back to the day his sister, Skye, had been abducted.

He spent his entire life trying to remember that day, and now a seemingly ordinary tree resurrects the memory from his subconscious. It didn’t make any sense. None of it did, but Michael follows his only lead, journeying him into the realm of Alfheim, where he finds a world decimated by war.
To save it and everything he loves, Michael and his newfound friends must learn magic from the demi-god, Konungr, in hopes that it will be enough to lift the curse of Nidavellir and restore Alfheim to its once renown beauty.