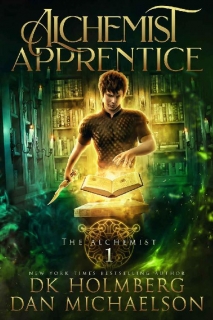 Sam’s desire to protect his sister leads him to magic he never imagined.
The powerful arcane arts have kept Olway safe for generations, taught only to those tested and proven to have real potential at the prestigious Academy. That power has never been found on the edge of the kingdom where Sam and his sister struggle to survive. Until now.

A terrible mistake puts Sam at the mercy of a master of the arcane arts who brings Sam to the Academy to help learn what happened to the last of the Alchemists. Posing as a student, and with no magic of his own, he tries to navigate the Academy and discover the secrets of Alchemy. When he discovers a dangerous power that could destroy the Academy, Sam is tested in a way he’d never imagined.

Having no magic of his own, his mind and wits might not be enough to stop a dangerous power that has turned its attention upon the Academy—and is now focused on Sam.