Against the Clock by John Carson 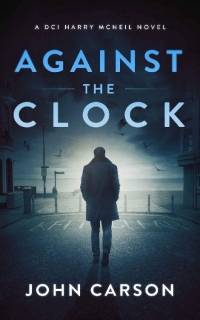 The body of a teenager is found near Portobello Beach in Edinburgh, wrapped in plastic. She went missing five years ago but it’s obvious she only died recently.
Inside the plastic is the dress she was wearing when reported missing. Where has she been kept and why has she been killed now?

The dead girl’s abduction mirrors that of two young girls who have gone missing in the past two weeks.
DCI Harry McNeil is assigned the case with the help of two colleagues from Glasgow, who have discovered the body of a young girl in an abandoned leisure park.

Now an eight year old girl is snatched from the beach. Is it connected to the other two older girls who have gone missing?
As the detectives follow the clues, they know they’re dealing with somebody who is not only a deranged killer but who will disappear with his victims. Just like he did five years ago. Harry and the others are pulling out all the stops to find the girls, but all of them know, they’re running against the clock..