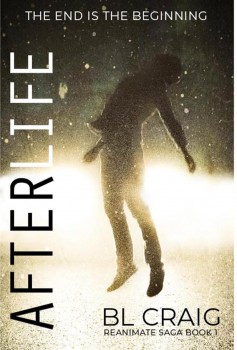 William Butcher is Dead . . . but there’s still work to do.

Forever removed from the love of his life and the future they planned to build, the young navy pilot must now spend the remainder of his existence in service to the leviathan AfterLIfe Corporation.
With a crew of fellow reanimates, William is sent on a secret mission into alien space. Their job, to determine if a rival species plans to invade a vulnerable Earth colony. It is a journey that will challenge the very heart of what it means to be human.
William will have to decide where his allegiance lies. Is it with the living he left behind or the dead whose fates are bound together?

With the secrets AfterLife has hidden from the living and the dead for centuries unravelling, William and the rest of the undead have to survive long enough to stop a galactic war.
The only certainty for the dead is that the end is only the beginning.