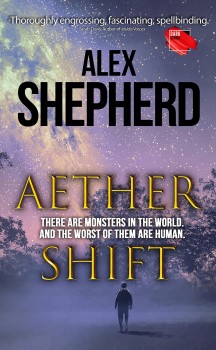 Daen made a terrible mistake.

He disobeyed orders, and now half his team are dead. Those who survive face an even worse fate in the mires of the Geimaran slave trade. When Daen ends up in the custody of a powerful enemy nobleman, his part in the Resistance may be over.

At his captor’s estate, the evil he and his fellow rebels oppose is darker than they imagined. Their enemies keep the Aether-touched in chains and slaughter mages on sight. But Duke Kieron is doing something even worse: he’s stealing free will, transforming his captives into mindless, devoted slaves who obey his every order. If he succeeds in harnessing the full power of these magical beings for his kingdom’s gain, it could mean the end of the Resistance.

But one amongst them resists Kieron’s thrall: Asha’s unique abilities make her immune to the duke’s compulsions, though her deep mistrust of humanity also makes her an unlikely ally. But with no Aethercraft of his own, Daen needs any help he can get to win back his freedom.

Will Asha overcome her fears and help him escape, or will Daen succumb to his enemy’s machinations and become the very enemy he fights to overthrow?