A War of Swallowed Stars by Sangu Mandanna 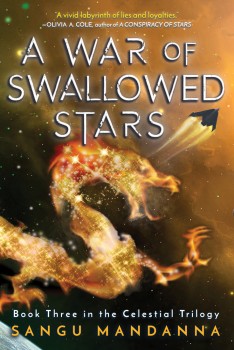 A prince without his kingdom. A kingdom without its princess. The destruction of the stars themselves. War is destroying the galaxy. Esmae has vanished without a trace. A terrifying, ravenous beast is devouring the stars one by one. Titania is offered a gift that may well be a curse.

Alexi, the exiled prince, is asked to pay a heavy price for his mistakes. And far, far away, on a dark, mysterious planet, a sleeping god stirs awake. War or family. Pride or peace. As the end of the world draws ever closer, Esmae and Alexi must decide how far they’ll go to win—and who they’ll sacrifice along the way.