A Vow That Clashes by Cully Mack 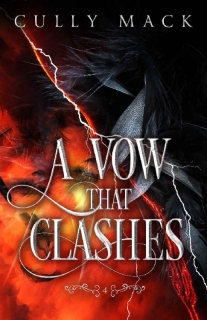 When a vow demands sacrifice, who will pay the price?
Far behind Gabe is his innocence, destroyed when a Watcher slaughtered his clan. Now considered a chosen one, Gabe strives to understand his magic and his calling. He desires nothing more than to find his sister but is besieged by hybrid abominations intent on extinguishing mortal life, his most of all.
His allies: a cunning thief, an Immortal, and a Fire Wielder stand fast with those seeking sanctuary underground. It’s a trap. The god of deep mines and solver of secrets is coming… A perilous maze of tunnels, their sole hope of escape.

As vows and destiny collide, Gabe faces a devastating choice: abandon the people and his allies or forsake his beloved sister.
The fate of the world rests on his decision, for the Watchers know a greater adversary approaches, a possessor of flesh. The clash between darkness and light has never been more dreadful.