A Tsar’s Gold by Andrew Clawson 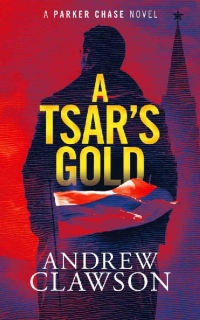 Parker Chase returns in a race against time to follow a trail through the past toward a lost treasure which changed the course of two World Wars.
After an elderly German expatriate walks into Parker Chase’s office with a bar of Russian gold and a business proposition, Parker is stunned when the man is murdered minutes later. As he tries to discover why the German came to him, Parker quickly discovers the man’s story is far more than dangerous than it seems.

Parker travels to Germany with historical scholar Jane White in search of the truth behind the dead man’s tale. It isn’t long before they are attacked by a shadowy group intent on uncovering what Parker knows before permanently stopping his quest. Forced to run for their lives, Parker and Jane must follow a decades-old path leading across Europe to reveal the truth behind the gold.

When a group of ruthless Germans with ties to the highest levels of international politics appear with murderous intent, Parker and Jane have no idea who to trust or where to turn. Their only option is to follow a path leading to mankind’s darkest hours while dodging bullets in a race where there is no prize for second place. Parker and Jane will need to outwit agents from two nations in order to unearth the secrets behind a prize which changed the course of history.