A Tortured Soul by L.A. Detwiler 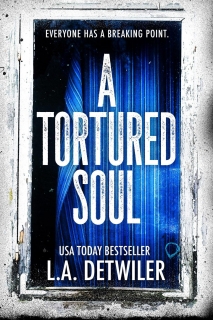 Everyone has a breaking point.

At twenty, an unplanned pregnancy seals Crystal Holt into a marriage to the abusive Richard Connor. After a stillborn birth, Crystal insists they have the baby baptized postmortem. A cynic, a drunk, and a poor man, Richard has other plans. When her monstrous husband tosses the baby into the woods to be forgotten, Crystal instantly spirals. After beating her within an inch of her life, Richard does something else he’s done before—he disappears. This time, however, things feel very different…
With her husband gone, Crystal battles with the demons of abuse, dark childhood memories, and a declining mental state worsened by horrific nightmare sequences. As the story unfolds, it becomes clear that something’s not quite right about the way Richard disappeared this time, and Crystal is in more danger than ever. After all, not all of the dark secrets belong to Richard.

Will Crystal be able to escape from a lifetime of torture unscathed, or will she succumb to the dark secrets she’s fallen prey to before?