A Thief in the Night by E.W. Hornung 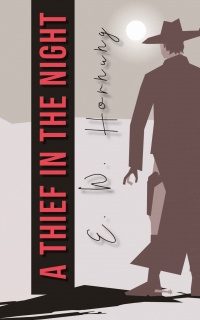 One story, for example, has Raffles and Bunny visiting their old minor public school and re-enacting some of Raffles’ schoolboy exploits. Another has a supposedly dead Raffles visiting a museum in Scotland Yard that contains articles from his more famous crimes. The last story is unusual in that it is told by Bunny’s former fiancée and shows Raffles in an unusually honourable light. One of the reasons that the Raffles stories remain popular is that Hornung makes no attempt to paint either Raffles, or his accomplice Bunny, as saints. They steal from the innocent as well as the greedy, and they are entirely prepared to kill if necessary. Many of their exploits end as fiascos and their life after Raffles’ “death” is frankly dismal.

Includes:
Out of Paradise
The Chest of Silver
The Rest Cure
The Criminologists’ Club
The Field of Phillipi
A Bad Night
A Trap to Catch a Cracksman
The Spoils of Sacrilege
The Raffles Relics
The Last Word