A Text Before Dying by McGarvey Black 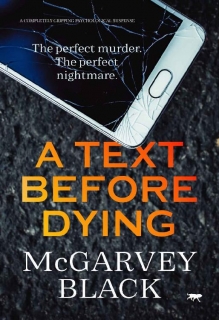 The Perfect Murder. The Perfect Nightmare.
Spying from her window in New York City with high-powered binoculars, conspiracy theorist Zoe spots a man and woman on a park bench. Zooming in, she finds she can read the texts on the woman’s phone. Her initial excitement turns to alarm when the woman’s texts outline a plan to murder the man she is sitting next to.

The police department is trying to manage a pandemic and catch a serial killer who has murdered six women. So, when Zoe reports the conspiracy to commit murder, the police have little time or patience for her theories.
Committed to saving the life of the man on the bench, Zoe and her best friend Sean pursue all angles until Zoe finds herself in grave danger.

But those around her keep wondering, is there really a murder plot or is it all in Zoe’s head?