A Single Swallow by Zhang Ling 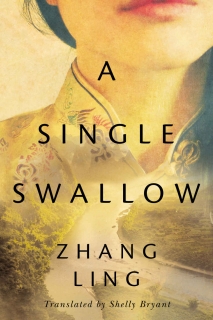 The eagerly awaited English translation of award-winning author Zhang Ling’s epic and intimate novel about the devastation of war, forgiveness, redemption, and the enduring power of love.

On the day of the historic 1945 Jewel Voice Broadcast—in which Emperor Hirohito announced Japan’s surrender to the Allied forces, bringing an end to World War II—three men, flush with jubilation, made a pact. After their deaths, each year on the anniversary of the broadcast, their souls would return to the Chinese village of their younger days. It’s where they had fought—and survived—a war that shook the world and changed their own lives in unimaginable ways. Now, seventy years later, the pledge is being fulfilled by American missionary Pastor Billy, brash gunner’s mate Ian Ferguson, and local soldier Liu Zhaohu.

All that’s missing is Ah Yan—also known as Swallow—the girl each man loved, each in his own profound way.

As they unravel their personal stories of the war, and of the woman who touched them so deeply during that unforgiving time, the story of Ah Yan’s life begins to take shape, woven into view by their memories. A woman who had suffered unspeakable atrocities, and yet found the grace and dignity to survive, she’d been the one to bring them together. And it is her spark of humanity, still burning brightly, that gives these ghosts of the past the courage to look back on everything they endured and remember the woman they lost.