A Relentless Fury by Ralph Kern 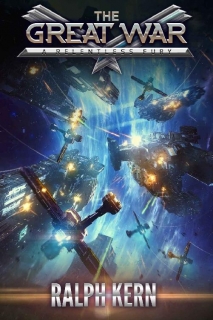 The Great War spreads…
One after another, the Kingdom’s star bases have fallen before the Neo Hegemony and their coalition. Only one remains in the strategically vital Talos Rift.
Valestra
Low on supplies, low on fuel and low on food – The base’s only hope is a desperate resupply mission. The Kingdom fleet assembles the largest convoy yet, protected by dozens of warships and hundreds of fighters.
Even with all the firepower the Kingdom can bring to bear, if only a single freighter manages to run the enemy’s relentless gauntlet, then the relief operation will be deemed a success.

Lieutenant Jason ‘Rick’ Richards knows he’s the best Tempest pilot in the Kingdom. But there’s an enemy out there who is his equal. Someone only he can defeat. Someone he must defeat.
Hegemony pilot, Major Gan Corla’s hatred for Rick burns strong. He has given himself body and soul to the Neo cause, but his hunger to take down his nemesis could overwhelm even that fanatical loyalty.
Both will risk all to kill the other. Even the mission. Even the war, if need be.
And while fighters and warships collide in ferocious combat, hidden in the dark, a new kind of warrior rises. Lieutenant Commander Nisha Draper and her stealth ship, the KSS Ghost, may be all that stands between the convoy, and the massive fleet of enemy reinforcements headed their way.