A Plan To Turn The Tables by Shane Shepherd 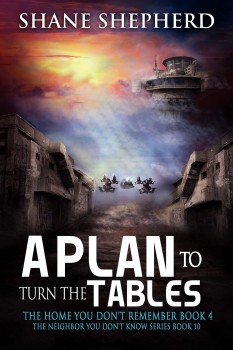 After a mission for the Resistance ended with Captain Baldwin Tavares and two of his people taken to the Ring, it was a struggle to get free—but finally they are out with more allies than they arrived with and heading back to the Resistance.

Now, Win and his crew have a new challenge to face: their allies in the Ring escaped with them, which means losing access to its systems and infrastructure… which they need to contact the Enemy. They must find a different way to reach them, so they may finally speak to these foes of the Spiders who have a plan they want to share with the Resistance.

With such a powerful ally on their side, Earth might have a real chance to drive their invaders away. But Win finds himself wary of who this Enemy truly is, and humanity will have to decide what role it will have in a conflict that’s so much bigger than them.