A Past That Breathes by Noel Obiora 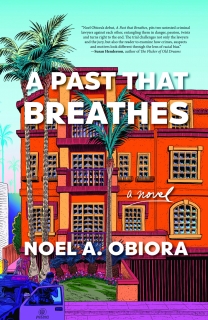 In January 1995, a promising young musician was found murdered in her apartment in West Los Angeles. There were no eyewitnesses to the crime, but someone saw her arguing with her ex-boyfriend, an African American man, the day before she was found dead. With the city in the throes of the O.J. Simpson trial at the time, LAPD was not about to let another African American skip town after killing a white woman. They arrested the ex-boyfriend on circumstantial evidence but ignored other evidence found at the scene of the crime that did not support their case.

This collection of evidence, and LAPD’s questionable tactics, did not sit well with the younger of two deputy district attorneys assigned to the case. Worse still, the defendant had hired a lawyer with whom the younger deputy district attorney had strong mutual attractions in college and had started seeing again. Caught in a web of the ideals they swore to uphold, an affair that could destroy their careers, and social and systemic racism, the young lawyers, both trying their first murder case, are plunged into the realities of a divided city and their place within it.