A Murder Hunt by Gillian Larkin 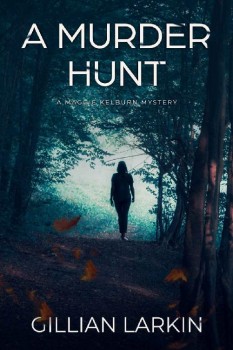 First, a man was staring at her from a tree.
Then there was a dead man in her garden.
And now, Maggie Kelburn is investigating another murder.

Maggie spots a young man up a tree in the public lane behind her house. He soon flees but leaves behind three plastic coins. Maggie discovers the coins are part of a treasure hunting game.

A few hours later, Maggie is shocked to find a dead body in her back garden. It appears he fell from the tree which the young man was in earlier.
The police take over. They conclude the man, Harvey Chester, died as a result of an accident.
His grieving sister isn’t convinced. She thinks Harvey was murdered and asks Maggie to prove it.
Maggie agrees and is soon caught up in a secret world of treasure hunting. To her dismay, she discovers many members of Harvey’s group hated him with a vengeance. Furthermore, they constantly lie to Maggie when she questions them about Harvey’s death.
Maggie persists, and it’s not long before she makes a connection between Harvey’s death and the members of the treasure-hunting group.
But the killer is aware of Maggie’s every move, and when she gets too close to the truth, the killer decides to make a move on Maggie.