A Memory of Murder by Nichelle Seely 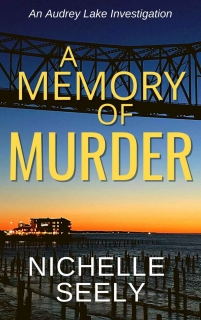 Former homicide detective Audrey Lake is determined to start a new life as she recovers from an emotional breakdown and a nearly-fatal stab wound. She settles in the old and mossy town of Astoria on the Columbia River, a thousand miles and a world away from the crime-ridden streets of Denver and her career an undercover cop. In the midst of small-town peace and quiet, she hopes to sort out the trauma and harrowing memories from her last assignment.

But Audrey begins to have recurring visions of a woman being attacked and forcibly drowned. The hallucinations bear all the familiar, terrifying earmarks of psychosis. And when the river yields up the body of the same woman who appeared in her vision, Audrey is forced to ask: is she finally losing her mind, or is there another explanation?

Driven to investigate, she digs into Victoria’s life and secrets. But doing so compels Audrey to examine the unresolved pieces of her own past. Can she discover the truth behind the killing, or will the investigation push her beyond the breaking point?