A Knight of Cold Graves by Clara Coulson 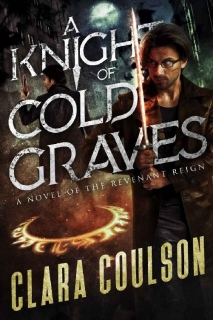 “Even the strong force of fate can’t blow the coming storm off course.”

Until they were eleven years old, identical twins Saul and Tanner Reiz were inseparable. Then a terrible accident sent Saul spiraling down a delinquent path that ultimately spurred him to run away from home. And so Tanner wandered into an average adulthood alone, while Saul wandered into something altogether…different.

But when a case of mistaken identity unexpectedly throws Tanner and Saul back together after twelve long years of separation, the brothers find themselves stumbling through a race to stop a dangerous magic conspiracy that’s been building in the shadows of the world for generations.

Three innocent girls have been kidnapped. A dangerous weapon has been stolen. And a deadly ritual has been set in motion that, if successful, could disastrously alter the course of the future.

Saul and Tanner have mere hours to unravel the mystery and rescue the girls. But the enemies they face harken back to a time of myth and legend, populated by knights and wizards and powers beyond belief. So if the brothers can’t quickly reconcile their decade’s worth of differences, they may very well lose the battle…and the world may lose the war.