A King’s Bargain by J.D.L. Rosell 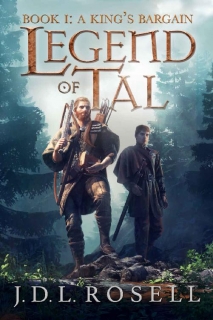 The legend of Tal Harrenfel is sung across the Westreach — and with each telling, the tales grow taller. But though he’s declared a hero by his King, Tal has never claimed to be more than a man…

After three decades of fighting warlocks, killing mythical beasts, and hunting enchanted treasure, Tal has had enough. Running from the deeds of his past, he retreats to his home village under a different name and meets an unlikely companion: Garin, a village boy who dreams of making a name for himself and seeing the world beyond their sleepy town.

When Tal receives a mysterious visitor, both he and Garin find themselves thrown into a sojourn across the kingdom. Soon, they become embroiled in the plots of monarchs, on the frontlines of an ancient war, and at the mercy of a fabled sorcerer.
Now Tal must live up to his legend, and Garin discover his own power, to survive the forces pitted against them…