A Dish of Spurs by Robert Low 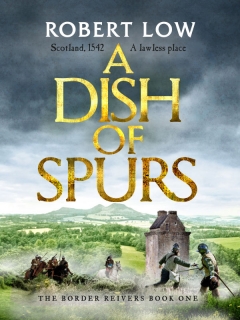 In the space between nations, nothing is out of bounds.
1542. For centuries the Scottish and English borders were known as the Debatable lands: wild, lawless, and the province of reivers, tight-knit robber families that roamed and pillaged the remote passes without fear…
Fifteen-year-old Mintie Henderson has just seen her father murdered. With the Scottish King newly dead and an army of hired reivers on the march, justice is in short supply. Then she comes across Batty Coalhouse: one-armed and hard as nails. Together they will set out on a journey of revenge.

But they are soon caught up in something bigger, a tale of Mary Queen of Scots and King Henry VIII. Stuck in the heart of a tempest, they know only one way to get out alive…

Fight.
Dark, brutal and utterly unforgettable, this is a triumphant novel from a modern master, perfect for fans of Conn Iggulden, Bernard Cornwell and Christian Cameron.